Researchers are puzzled as to why there seems to be a significant rise on rates of asthma in children compared to previous years. A study released from the CDC reported that nearly one in 10 children and one in 12 Americans have asthma. From 2001 to 2009, the overall rate of asthma increased 12.3%. In 2013, it cost $57 billion to care for asthma patients. 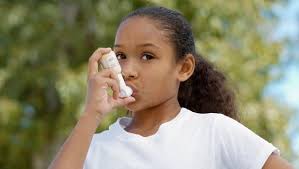 Despite lower rates of smoking and second-hand smoke, the prevalence of asthma increased in all demographic groups, including men, women, whites, blacks, and Hispanics. Possible reasons for this sudden increase include various allergens, traffic fumes, pesticides, certain plastics, diet and obesity.

Here’s one more possibility: Obstructive sleep apnea. We know that children arekids with asthma more overweight than ever, and along with this it’s expected that sleep apnea will increase as well. Multiple breathing pauses at night can literally suction up your stomach juices into your throat, which can then reach your nose or your lungs. This causes your nose and your lungs to become inflamed and over-reactive to allergies, fumes, and even weather changes.

Lack of deep sleep also causes your nervous system and your immune system to become hypersensitive, aggravating this vicious cycle.

Notice how it’s not just asthma rates that are going up. Many of the other childhood related conditions are going up as well: obesity, ADHD, autism, allergies, etc. These are all part of the same continuum that unfortunately, are treated as independent conditions. With multiple breathing pauses at night, any of these conditions can occur or aggravate an already existing condition.

Having an asthma attack in the middle of the night can be a frightening and terrifying experience. Typically, these attacks happen in the early morning hours, just before awakening.

We typically think of asthma being a separate, distinct condition from obstructive sleep apnea, and it’s treated in completely different ways. However, it’s not just coincidence that nocturnal awakenings from asthma and the most intense periods of apnea occur at the same time in the middle of the night—the early morning hours.

The early morning hours are when REM sleep is most prominent, and this is the time when throat muscles are most relaxed. Having an apnea also is known to cause reflex, which is known to reach the throat as well as the nose and the lungs. In one small study in people with sleep apnea and asthma, treating sleep apnea with CPAP significantly improved nocturnal asthma symptoms.

We know that any degree of stress on the mother’s body can lead to a higher rate of pregnancy-related complications and low birth rates. Even snoring by the mother alone was found to result in lower Apgar scores in newborn infants. Apneas are also known to raise blood pressure and promote insulin resistance. Stress hormones are also known to increase when you have apneas.

In light of all these findings, it’s not surprising that pregnant women with poorly controlled asthma have higher complications rates. This is another great example of “connecting the dots” between two seemingly unrelated conditions, which only adds to support my sleep-breathing paradigm.

At The Alaska Sleep Clinic, we provide consultation and therapeutic management for a wide variety of pediatric sleep disorders. We understand that your child's health is important to you and we want to assure you that our Board Certified Sleep Physicians are highly adept at treating child sleep disorders.  Click the link below for a free 10 minute phone consultation.