How Sleep Apnea Can Cause Stress and Panic Attacks

Find me on:
Facebook
on Aug 13, 2018 9:00:00 AM
Panic attacks and anxiety are common conditions that you see often written about. In a 1999 published article in Johns Hopkins Magazine, author David Levine describes in vivid detail his first experiences with panic and anxiety as a college student at age 19. It’s remarkable how these episodes could be attributed instead to new onset apneas.

He quotes, ” The worst attacks struck at the end of dreamless naps. I woke up completely drenched, disoriented, my heart pounding.” His very first episode presented after waking up one morning with an impending sense of doom.

Repeated obstructions to breathing can set off a constant fight-or-flight response, which can carry over into the daytime. Waking up suddenly after suffering from a 20 to 30 second apnea can cause the typical nervous symptom reactions like your heart racking, sweating, and a feeling of doom. Medications like Valium can calm the edginess and anxiety, but never completely “cures” the problem. Eventually these episodes slowly subsided for Mr. Levine after years. Decades later, he is diagnosed with obstructive sleep apnea (OSA).

Of course it’s hard to say if he had sleep apnea at the time of his first panic attack. His guess is no, since a  handful of short obstructions and arousals may not be enough to qualify for a formal diagnosis of OSA. 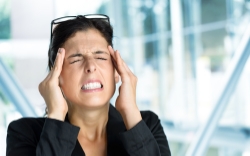 It’s also no coincidence that most people with anxiety or panic attacks can’t sleep on their backs. Due to crowding of the upper airway from smaller jaws and crowding of the teeth, the tongue and voice box falls back due to gravity. Whenever deeper levels of sleep is reached, the throat muscles relax, and obstruction happens. If it lasts longer than 10 seconds, it’s an apnea. If it’s less than 10 seconds, it’s not counted in the final sleep apnea score. This is one major reason why people may stop breathing 20 to 30 times every hour and have an AHI score of 0. They are usually told they don’t have sleep apnea and that their fatigue and anxiety are due to other potential medical problems. This condition is called upper airway resistance syndrome.

It’s no wonder that patients with depression do better if you address sleep quality. Whether it’s from poor sleep hygiene or OSA, it’s important to address any potential sleep problems before medicating anxiety or panic attacks.

Tension and stress causes a nervous system reaction that causes you to take short, shallow breaths, leading to carbon dioxide (CO2) retention. Interestingly, a recent study showed that increased levels of carbon dioxide has been shown to affect areas in the brain that triggers fear and panic attacks.

This makes sense since if you’re chronically oxygen deprived from not breathing at night due to sleep apnea, you’re going to build up carbon dioxide, which can increase the acidity levels in the amygdala, which is the area of the brain that processes fear and behavior.

This biochemical reaction, along with generalized nervous system over-responsiveness that comes along with inefficient sleep, is a good reason for you to feel over-stressed, over-anxious, and on edge. I’ve also described a situation where your tongue suddenly collapses and obstructs your breathing, and you’ll wake up violently, in a state of panic, in a cold sweat, and with your heart racing. This happens much more commonly than you think.

This study makes researchers wonder what all the carbonated beverages are doing to us as a society.

For those of you who are prone to sleepless nights and anxious days, Alaska Sleep Clinic wants to help you get answers.  Improve your sleep and improve your life!  Contact us today for your free sleep assessment.