How Snoring Can Wreak Havoc On A Marriage...

I am by no means a marriage therapist. However, I hear couples complain all the time. They come in for a sleep assessment, and within seconds the husband makes a comment such as, “My wife made me come.” Snoring is more common in men than women, but the reverse is also common.

The snoring spouse who feels “dragged” to the doctor’s office is resentful that his or her snoring problem can’t be left alone. The spouse that does the dragging-in is frustrated and tired. Ordinarily affectionate couples can have a strain in their relationship caused by snoring. Sometimes if it wasn’t for their spouse, a snorer wouldn’t even know they had a problem.

The reason for resentment is understandable. Snoring can cause daytime symptoms that can cause serious problems in one’s waking life, and unfortunately it is not just the snorer that suffers — the snorer’s spouse can suffer just as much.

According to the National Sleep Foundation, 39 percent of American adults get less than seven hours of sleep each weeknight, and more than one in three (37 percent) are so sleepy during the day that it interferes with daily activities. The sleep loss associated with snoring — whether it’s the snorer or the bed partner who is awakened by the snoring, interrupts important recuperative sleep, which can impair a person’s ability to perform cognitive tasks involving memory, learning, reasoning and mathematical processes. It can impair motor skills and can cause morning headaches, irritability, burnout and depression, to mention just a few symptoms.

Symptoms can be even more severe for the snorer if they have sleep apnea, a condition which causes them to stop breathing often many times a night and wake gasping for air. Sleep apnea is linked to lung and heart disease, diabetes, obesity and stroke.

The disruption of sleep from snoring is causing couples to have a hard time sleeping together. To avoid the symptoms of daytime sleepiness, many couples choose not to sleep together in the same bed.

In the book, “Two in a Bed: The Social System of Couple Bed Sharing,” author Paul C. Rosenblatt interviewed 42 couples and examined how sharing a bed affects the couple’s relationship. Many couples described the intimacy and comfort level of sleeping in the same bed is extremely important to their relationship. As he describes in the book, in their time together before drifting off to sleep, “couples catch up on what’s going on with one another, plan, make decisions, deal with disagreements and solve problems.”

With their hectic schedules, many couples often only have this time to catch up. It is no wonder why it’s crucial to their relationship. Unfortunately, snoring can force one spouse into another room for the sake of sleep, and this crucial together time is hard to replace in their busy lives otherwise.

If your marriage is suffering because you or your spouse snores, the key to reconciling is to understand that snoring is a symptom of a physical condition, such as sleep apnea, and it can be treated. There are many non-surgical, in-office and minimally invasive treatments available to snorers today. Although we at Alaska Sleep Clinic would never make the claim that we have saved marriages, we have heard back many times from patients who tell me that it wasn’t until after their snoring was cured they realized how much happier they are snuggling next to their spouse again. 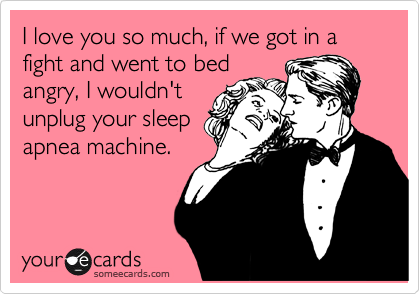 It is Valentine's Day. This year's top gifts include flowers, jewelry, chocolates and a CPAP machine for your soul mate. What better way to keep love alive than with a good night's sleep?