Sleep Apnea IS a Big Deal

I had actually known I had sleep apnea for a number of years; I just didn’t do anything about it. My wife would tell me that I stopped breathing during the night and that she would lie awake counting the seconds until I started to breathe again. I thought I was sleeping through the night, so I never really gave it a lot of thought. Anyway, what’s the big deal? So I snore and stop breathing. At least I’m getting some sleep.

I did know I was often tired by the end of the day–and during the day. If I went to lunch with a group of co-workers, I would usually migrate to the back seat and take a five- or ten-minute nap on the way back from lunch. I would snore the whole ride back to the office. They were amazed that I could go to sleep at the drop of a hat–and annoyed, too, about the snoring.

A few years ago I went for a routine physical, and my doctor asked me at the conclusion if there were anything else she needed to know. I told her I had sleep apnea. She asked me how I knew, and I told her about my wife’s account of my sleep habits.

She then asked me if I ever fell asleep while driving. I confessed I had mastered the art of taking a quick nap at traffic lights on the way home from work–but I’d wake up before the light turned green. This really got her attention, and she pulled out a business card from her desk for a sleep specialist.

Several weeks later I found myself checking into a sleep clinic for the first of two evenings. I was wired astronaut-style with a number of electrodes. The individual wires all terminated into a box about the size of a computer mouse which was then connected to a larger cable connected to the recording equipment. (This disconnect feature came in handy later in the evening when it came time to use the restroom down the hall.) I slept in what looked like a standard hotel room.

There was a small video camera mounted in the corner of the room on the ceiling (to let the sleep center compare the printout of my breathing–or lack thereof!–with any tossing or kicking in the night). I woke up the next morning, and the technician told me she had been monitoring two patients that night and didn’t pay much attention to either of us but she thought at a glance I had a pretty serious case of sleep apnea. My actual log of activity that documented the entire evening was stored in a computer, and from that the center would generate a report.

The next night I returned, knowing that the diagnostic study must have shown I had sleep apnea, and spent the night in the same room with the same number of electrodes, and the same technician wired me up.

The only difference is this time I used an apparatus called a CPAP (continuous positive airway pressure) machine to keep me breathing; this study would determine what CPAP pressure I needed to control my apnea. I have a full beard, so the tech used the nasal pillows instead of the standard mask as the whiskers on my face probably would have prevented me from getting a good mask seal and would have caused mask leaks.

I thus used a “Y-shaped” deal that actually fit into my nostrils with round accordion-shaped “pillows” to route the air into my nose. I spent the night connected to the computer again while the technician was able to control the CPAP machine via remote control and experiment with different settings to see which ones worked best.

Waking up that morning was amazing.

I felt like a ten-year old who had polished off a pot of coffee. I couldn’t believe how completely refreshed I felt! It was truly like the difference between day and night.

A couple of weeks later I was in the specialist’s office, and he read me the results of the first night’s diagnostic testing.

I had experienced an arousal (a mini wake-up call from the brain to resume breathing) 592 times during the night. This averages out to about 45 seconds of sleep at a time. My sleep was so interrupted, I rarely had any dreaming sleep, so no wonder I remembered dreaming only a couple of times a year!

The doctor actually sat straight up in his chair when he got to the blood oxygen levels. A normal level is 95 percent plus. Mine had desaturated or dropped to almost 50 percent during the night. He said, “This is serious. This can kill you.”

He noted that I had probably been sleep deprived for about 15 years. You may wonder how anyone could put up with this sort of thing on a nightly basis. The answer is simple: if you don’t know it’s going on, you don’t realize it is a problem. And you become used to the sleepiness and all the other problems sleep apnea causes, and you don’t know it’s possible to feel any different.

I am pleased to report that after two and a half years, I have had little trouble with my machine. I have traveled all over the United States and have been to nine foreign countries with it. My unit features self-tapping voltage selection–in other words it will run on any available power, all I need is an adapter on the existing power cord to plug into the wall. I have run into two fellow travelers with similar machines at airport security checkpoints and even a store clerk with a machine as I purchased a container for my humidifier unit.

I will admit me with the headgear and the machine is a sight to behold . . . a real “babe magnet.” Yet with it, I can be assured a good night’s sleep wherever I go. I also don’t snore anymore. And my wife is very pleased with that change.

Untreated sleep apnea is a big deal, after all.

What to do Next

If you're an Alaskan resident and you believe that you may have symptoms of sleep apnea, call us

to get your free 10-minute phone consultation with one of our clinical sleep specialists. In just 10 minutes we can help you discover whether or not your symptoms warrant a sleep study to help you get diagnosed and treated for your sleep disorder. 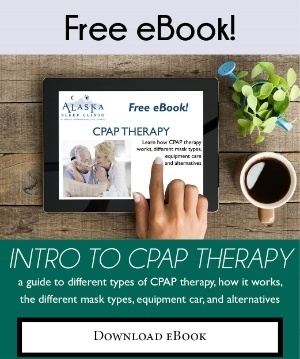