What Is Sleep Apnea? - A Refresher Course, Part 2

Sleep apnea may be diagnosed by the evaluation of symptoms, risk factors and observation, (e.g., excessive daytime sleepiness and fatigue) but the gold standard for diagnosis is a formal sleep study (polysomnography, or sometimes a reduced-channels home-based test).

A study can establish reliable indices of the disorder, derived from the number and type of event per hour of sleep (Apnea Hypopnea Index (AHI), or Respiratory Disturbance Index (RDI)), associated to a formal threshold, above which a patient is considered as suffering from sleep apnea, and the severity of their sleep apnea can then be quantified.

Despite this medical consensus, the variety of apneic events (e.g., hypopnea vs apnea, central vs obstructive), the variability of patients' physiologies, and the inherent shortcomings and variability of equipment and methods, this field is subject to debate. Within this context, the definition of an event depends on several factors (e.g., patient's age) and account for this variability through a multi-criteria decision rule described in several, sometimes conflicting, guidelines.

One example of a commonly adopted definition of an apnea (for an adult) includes a minimum 10-second interval between breaths, with either a neurological arousal (a 3-second or greater shift in EEG frequency, measured at C3, C4, O1, or O2) or a blood oxygen desaturation of 3–4% or greater, or both arousal and desaturation.

Oximetry, which may be performed over one or several nights in a person's home, is a simpler, but less reliable alternative to a polysomnography. The test is recommended only when requested by a physician and should not be used to test those without symptoms. Home oximetry may be effective in guiding prescription for automatically self-adjusting continuous positive airway pressure. 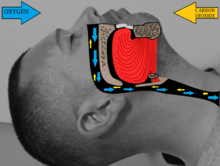 No airway obstruction during sleep. 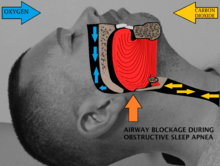 Obstructive sleep apnea (OSA) is the most common category of sleep-disordered breathing. The muscle tone of the body ordinarily relaxes during sleep, and at the level of the throat, the human airway is composed of collapsible walls of soft tissue which can obstruct breathing.

Mild occasional sleep apnea, such as many people experience during an upper respiratory infection, may not be significant, but chronic severe obstructive sleep apnea requires treatment to prevent low blood oxygen (hypoxemia), sleep deprivation, and other complications.

Individuals with low muscle-tone and soft tissue around the airway (e.g., because of obesity) and structural features that give rise to a narrowed airway are at high risk for obstructive sleep apnea. The elderly are more likely to have OSA than young people. Men are more likely to suffer sleep apnea than women and children are, though it is not uncommon in the last two population groups.

The risk of OSA rises with increasing body weight, active smoking and age. In addition, patients with diabetes or "borderline" diabetes have up to three times the risk of having OSA.

Common symptoms include loud snoring, restless sleep, and sleepiness during the daytime. Diagnostic tests include home oximetry or polysomnography in a sleep clinic.

Many people benefit from sleeping at a 30-degree elevation of the upper body or higher, as if in a recliner. Doing so helps prevent the gravitational collapse of the airway. Lateral positions (sleeping on a side), as opposed to supine positions(sleeping on the back), are also recommended as a treatment for sleep apnea, largely because the gravitational component is smaller in the lateral position.

Some people benefit from various kinds of oral appliances such as the Mandibular advancement splint to keep the airway open during sleep. Continuous positive airway pressure (CPAP) is the most effective treatment for severe obstructive sleep apnea, but oral appliances are considered a first-line approach equal to CPAP for mild to moderate sleep apnea, according to the AASM parameters of care.

There are also surgical procedures to remove and tighten tissue and widen the airway.

Snoring is a common finding in people with this syndrome. Snoring is the turbulent sound of air moving through the back of the mouth, nose, and throat. Although not everyone who snores is experiencing difficulty breathing, snoring in combination with other risk factors has been found to be highly predictive of OSA.

The loudness of the snoring is not indicative of the severity of obstruction, however. If the upper airways are tremendously obstructed, there may not be enough air movement to make much sound. Even the loudest snoring does not mean that an individual has sleep apnea syndrome. The sign that is most suggestive of sleep apneas occurs when snoring stops.

Other indicators include (but are not limited to): hypersomnolence, obesity BMI >30, large neck circumference (16 in (410 mm) in women, 17 in (430 mm) in men), enlarged tonsils and large tongue volume, micrognathia, morning headaches, irritability/mood-swings/depression, learning and/or memory difficulties, and sexual dysfunction.

The term "sleep-disordered breathing" is commonly used in the U.S. to describe the full range of breathing problems during sleep in which not enough air reaches the lungs (hypopnea and apnea). Sleep-disordered breathing is associated with an increased risk of cardiovascular disease, stroke, high blood pressure, arrhythmias, diabetes, and sleep deprived driving accidents.

When high blood pressure is caused by OSA, it is distinctive in that, unlike most cases of high blood pressure (so-called essential hypertension), the readings do not drop significantly when the individual is sleeping. Stroke is associated with obstructive sleep apnea.

It has been revealed that people with OSA show tissue loss in brain regions that help store memory, thus linking OSA with memory loss. Using magnetic resonance imaging (MRI), the scientists discovered that people with sleep apnea have mammillary bodies that are about 20 percent smaller, particularly on the left side.

One of the key investigators hypothesized that repeated drops in oxygen lead to the brain injury.