What Is Sleep Apnea? - A Refresher Course, Part 4

Excess body weight is thought to be an important cause of sleep apnea. In weight loss studies of obese and overweight individuals, those who lose weight show reduced apnea frequencies and improved Apnoea–Hypopnoea Index (AHI) compared to controls. 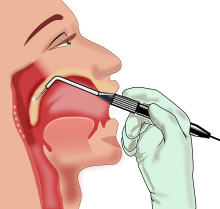 Several surgical procedures (sleep surgery) are used to treat sleep apnea, although they are normally a third line of treatment for those who reject or are not helped by CPAP treatment or dental appliances. Surgical treatment for obstructive sleep apnea needs to be individualized to address all anatomical areas of obstruction.

Tonsillectomy and uvulopalatopharyngoplasty (UPPP or UP3) are available to address pharyngeal obstruction. 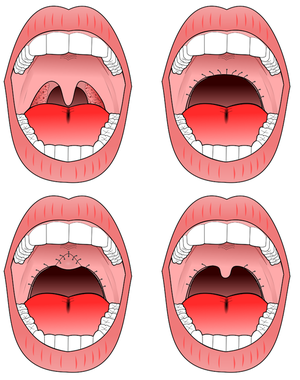 The "Pillar" device is a treatment for snoring and obstructive sleep apnea; it is thin, narrow strips of polyester. Three strips are inserted into the roof of the mouth (the soft palate) using a modified syringe and local anesthetic, in order to stiffen the soft palate.

This procedure addresses one of the most common causes of snoring and sleep apnea — vibration or collapse of the soft palate. It was approved by the FDA for snoring in 2002 and for obstructive sleep apnea in 2004.

A 2013 meta-analysis found that "the Pillar implant has a moderate effect on snoring and mild-to-moderate obstructive sleep apnea" and that more studies with high level of evidence were needed to arrive at a definite conclusion; it also found that the polyester strips work their way out of the soft palate in about 10% of the people in whom they are implanted.

Hypopharyngeal or Base of Tongue Obstruction

Base-of-tongue advancement by means of advancing the genial tubercle of the mandible, tongue suspension, or hyoid suspension (aka hyoid myotomy and suspension or hyoid advancement) may help with the lower pharynx.

Other surgery options may attempt to shrink or stiffen excess tissue in the mouth or throat; procedures done at either a doctor's office or a hospital. Small shots or other treatments, sometimes in a series, are used for shrinkage, while the insertion of a small piece of stiff plastic is used in the case of surgery whose goal is to stiffen tissues.

Maxillomandibular advancement (MMA) is considered the most effective surgery for people with sleep apnea, because it increases the posterior airway space (PAS). However, health professionals are often unsure as to who should be referred for surgery and when to do so: some factors in referral may include failed use of CPAP or device use; anatomy which favors rather than impedes surgery; or significant craniofacial abnormalities which hinder device use.

Several inpatient and outpatient procedures use sedation. Many drugs and agents used during surgery to relieve pain and to depress consciousness remain in the body at low amounts for hours or even days afterwards. In an individual with either central, obstructive or mixed sleep apnea, these low doses may be enough to cause life-threatening irregularities in breathing or collapses in a patient's airways.

Use of analgesics and sedatives in these patients postoperatively should therefore be minimized or avoided.

Surgery on the mouth and throat, as well as dental surgery and procedures, can result in postoperative swelling of the lining of the mouth and other areas that affect the airway. Even when the surgical procedure is designed to improve the airway, such as tonsillectomy and adenoidectomy or tongue reduction, swelling may negate some of the effects in the immediate postoperative period.

Once the swelling resolves and the palate becomes tightened by postoperative scarring, however, the full benefit of the surgery may be noticed.

A person with sleep apnea undergoing any medical treatment must make sure his or her doctor and anesthetist are informed about the sleep apnea. Alternative and emergency procedures may be necessary to maintain the airway of sleep apnea patients.[61]

Diaphragm pacing, which involves the rhythmic application of electrical impulses to the diaphragm, has been used to treat central sleep apnea.

In April 2014 the U.S. Food and Drug Administration granted pre-market approval for use of an upper airway stimulation system in people who cannot use a continuous positive airway pressure device. The Inspire Upper Airway Stimulation system senses respiration and applies mild electrical stimulation during inspiration, which pushes the tongue slightly forward to open the airway.

An oral appliance, often referred to as a mandibular advancement splint, is a custom-made mouthpiece that shifts the lower jaw forward and opens the bite slightly, opening up the airway. These devices can be fabricated by a general dentist.

Oral appliance therapy (OAT) is usually successful in patients with mild to moderate obstructive sleep apnea. While CPAP is more effective for sleep apnea than oral appliances, oral appliances do improve sleepiness and quality of life and are often better tolerated than CPAP.

Nasal EPAP is a bandage-like device placed over the nostrils that utilizes a person's own breathing to create positive airway pressure to prevent obstructed breathing.

Oral pressure therapy utilizes a device that creates a vacuum in the mouth, pulling the soft palate tissue forward. It has been found useful in about 25 to 37% of people.