Students who sleep less than seven hours a day have academic performance problems.

There is evidence indicating that the more night’s rest teens get, the better they do at school. However, most girls and boys in high school claim that they sleep less than 7 hours a night while they need at least 8,5 hours of night's rest to do well academically.

According to a National Institutes of Health report:

Causes and Effects of Sleep Issues in Students

Without exaggeration, a lack of sleep is one of the major problems for teenagers. The NIH study reveals the reasons why boys and girls don’t get enough night’s rest and thus feel sleepy all day long. Accept for staying up late and getting up early, there are many more causes of sleep problems in students:

It is all about bad sleeping habits. Those who fail to schedule their sleep time properly are known to have poor sleep hygiene, which usually results in trouble sleeping. Uncontrolled caffeine and alcohol consumption, uncomfortable sleeping environment, and late-night socializing – all of this may hurt students’ sleep hygiene.

Almost 12% of teens claim that they drink in the hope to sleep well. However, while alcohol helps them fall asleep faster, it is known to disturb their sleep later at night. Moreover, uncontrolled alcohol consumption is closely correlated with obstructive sleep apnea.

Those who drink caffeinated drinks, such as coffee, energy drinks, some teas, etc., late in the afternoon are very likely to have trouble sleeping, too, mainly because the alerting effect of the drinks lasts for more than 7 hours.

It is not uncommon for teenage boys and girls to use stimulants, both prescribed and non-prescribed. And those who use them are more likely than others to have trouble sleeping and engage in binge drinking and drug use.

It is not about noise at all. Our mobiles and computers are known to emit dazzling light, which in turn lowers our melatonin levels, and thus it is hard for us to get to sleep.

Those students who prefer to study all night long to improve their grades only harm themselves. If they do their assignments at a time when they are supposed to get some

rest, their body and mind lose their only chance to recharge. Therefore, all-nighters usually struggle to recollect what they learned last night and almost always find it difficult to stay focused during the daytime. That is why it is so important that all students can get coursework help every time they don’t feel like coping with schooling themselves.

Except for continuous sleepiness, nervous tension, and petulance, signs of a lack of sleep are as the following:

How to Get Restorative Slumber Every Night

Along with professional assistance that is aimed to help sleep-deprived individuals, there are a few simple steps that all students can take to get enough night’s rest:

Given that, all teenage boys and girls need to get an optimal amount of night’s rest regularly; otherwise, their well-being and progress are at risk.

There is a direct correlation between eight hours of good sleep and a student's stress level. What is more, it is important to adhere to regular sleep time patterns. The lack of good and regular sleep affects not only students’ moods but also their health condition and performance.

The importance of sleep cannot be overestimated and there is even such term as “sleep efficiency” that stands for the quality of sleep. Without the “efficient” sleep, good performance simply cannot be achieved. And even though there are thousands of cases proving this, the need for good sleep often remains ignored.

Alaska Sleep Clinic is the only sleep lab in the state of Alaska with a clinical psychologist who specializes in sleep, Dr. Angie Randazzo.  If stress if affecting your sleep and your stress level, call Alaska Sleep Clinic today to speak with one of our board-certified sleep specialists. 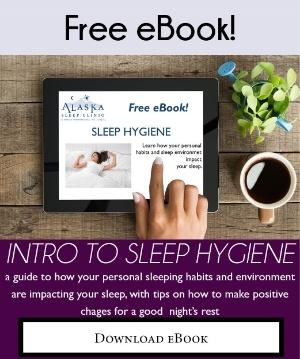