Are you one of the millions of seniors in the US who think life would be pretty good... if you could just get some sleep?

Changes in sleep patterns may be a normal part of aging, but many other factors common in older people contribute to sleep problems. These include physical illness or symptoms, medication side effects, changes in activity or social life, and the death of a spouse or loved one.

Sleep disorders decrease the quality of life in older people by causing daytime sleepiness, tiredness, and lack of energy. Poor quality of sleep also can lead to confusion, difficulty concentrating, and poor performance on tasks. Sleep disorders also are linked with premature death. The biggest sleep problem in older people is a feeling of not getting enough sleep (insomnia) or not being rested.

Normal sleep has different stages that cycle throughout the night. Sleep specialists classify these as rapid eye movement (REM) sleep and non-REM sleep.

Sleep changes with age. Older people are less efficient sleepers and have different patterns of sleep than younger people.

Among older people, women are more likely to have insomnia than men. More than half of people older than 64 years have a sleep disorder. The rate is higher among long-term care facility residents.

The sleep disorders that increase with age are sleep apnea and periodic limb movements of sleep (PLMS). Periodic limb movement disorder is also called nocturnal myoclonus. The prevalence of PLMS increases wityh age and may be found in a third or more of patients over 60.

Sleep apnea is the interruption of breathing during sleep. It is commonly caused by obstruction (blockage) of the airway. Rarely sleep apnea is caused by a problem in the nervous system, which controls breathing. Sleep apnea is very common among older overweight people.

Periodic limb movements in sleep refer to repetitive leg jerks during sleep. These jerks may awaken the person from sleep and usually disturb the bed partner. Many describe the movements as kicking movements. The movements may occur in only one leg or both legs.

Mental disorders are another common reason for sleep problems in older people.

Medications are another cause of sleep disturbance. Older patients in the US consume an average of 5-9 daily medications, some of which can interfere with sleep and wakefulness.

Lifestyle and social factors can contribute to sleep disorders.

Why is sleep apnea is less often diagnosed in the elderly

One of the main reasons that elderly patients are diagnosed less often with OSA is because they present atypical symptoms than the traditional model of a standard sleep apnea patient.

Traditional risk factors such as obesity, BMI, neck circumference, and snoring are less prevalent among the elderly leading to diagnostic challenges for healthcare professionals.

The association between OSA and other medical conditions such as hypertension, congestive heart failure, stroke, coronary artery disease, and atrial fibrillation makes getting elderly patients properly diagnosed critical as these are among the leading causes of death in this population.

Misdiagnosis and under-diagnosis can be attributed to the atypical symptoms presented by this group, cognitive issues of the patient, a lack of self-reporting, as well as a lack of awareness and criteria for diagnosing the elderly, according to a study published in Internet Scientific Publications.

If you live in Alaska and suspect, for any reason, that you (or a loved one) may have a sleep disorder and would like to speak with a sleep specialist, contact the Alaska Sleep Clinic by clicking the link below. Once your information has been entered a sleep educator will contact you within 48 business hours for a quick 10-minute over-the-phone consultation to determine if a sleep study is right for you.

It's never too early, or too late, to get help with sleep apnea. 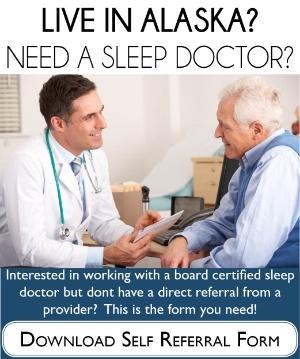