A Nap Makes Everything Better

Who's ready for a nap?

Watch today's CBS Sunday Morning's story about sleep and naps here called " Napping: You Snooze, You Win! " , or read the story below.

CEO Brian Halligan admits it: He sleeps on the job. He typically takes naps in the afternoon after lunch, almost every day, for a half-hour. His naps even find a place on his calendar.

Whoever said "you snooze, you lose," never met Halligan.  The Boston-area tech company that he and a partner founded now has 3,300 employees, and is worth $8 billion.

Correspondent Susan Spencer asked, "People are surprised that the head of an $8 billion company is sleeping his way through the afternoon?"

"It's only a half-hour!" laughed Halligan.

"Describe for me what it is about this process that you think somehow invigorates you?"

"I have this impression in my mind of, when I fall asleep, there's this little tiny man with a moustache and a broom and, like, a dustpan. And he goes around and he, like, cleans up inside my brain. So, when I wake up, it's like a clean room, and I'm very energized and my mind is open and I'm ready to receive more information and process it in a much better way."

"And you are not at all self-conscious about talking about the man with the broom?' Spencer asked.

Dr. Charles Czeisler heads up the sleep medicine division at the Brigham and Women's Hospital in Boston.  And he is a big fan of naps. "The best window for a nap is actually the mid-afternoon," he said. Three o'clock, he said, is "perfect."

Spencer asked, "If I'm at work and I take a nap, am I gonna be performing better after that nap than I was before?"

"You will," Dr. Czeisler replied. "Because actually you will consolidate some of the information you've learned during the daytime, and you'll be able to remember it better after that nap."

Just ask the folks at NASA: In a 1995 study they found that pilots who napped an average of just 26 minutes improved performance by 34%.  And other studies link napping to better cognition, sharper memory, and less frustration.

And if your boss comes along? "You can explain to your boss that this is how you're keeping your performance at its best," Dr. Czeisler offered.

But in 2013, Dr. Czeisler made that very pitch to the Boston Red Sox, who worried that lack of sleep was hurting their game. His advice: Put a nap room in the clubhouse.

It was extremely popular with the players, and later that season the well-rested Sox won the World Series. Their sleep doctor got his own a championship ring. "It has my name, which is kind of cool," he said.

Virginia Tech professor Roger Ekirch, a "sleep historian," said, "Winston Churchill, he believed in not holding back. Fueled by a breakfast consisting of brandy among other things, he would routinely take a nap from 2:00 to 4:00. This is during the war! Get under the covers, take off his clothes. This is not just falling asleep on a couch."

And the Allies won. "Precisely!"

Ekirch said that until the 18th century, most Europeans and North Americans slept in two separate chunks.

"Generally, people went to bed between 9:00 and 10:00 p.m.," he said. "They slept for three, three-and-a-half hours. Then they wakened not long after midnight."

And then they'd do … what? "People reflected on dreams, they meditated, they prayed; there were special prayers," said Ekirch.

They would stay awake for about an hour before entering phase two of sleep.

But the Industrial Revolution and its emphasis on productivity ended all that.

The stigma stuck. According to a new CBS News poll, one in five Americans thinks napping is a sign of laziness.

So, why do naps have such a bad name? Ekirch said, "Well, I can quote Ben Franklin: 'Up, sluggard! Sleep not. There's more than time enough to sleep in the grave.'"

naps are OK – just don't snooze your life away. She said the ideal nap is ten to 20 minutes.

"People that are sleep-deprived should definitely have a nap during the day to help them feel restored," she said. "But you know, on the other side of it, a nap could also impact your sleep at night. And so, you end up in this cycle of poor sleep at night, then you sleep a little bit during the day."

Spencer asked, "So naps, in your view, are basically for emergency use only?"

In a country where naps are shunned, sleep-deprived Americans searching for shuteye spend almost $30 billion a year on everything from weighted napping blankets, to sleep-enhancing pajamas, to ostrich pillows, advertised as helping you to "power nap anywhere."

No ostriches needed for Brian Halligan's naps, however. He simply retreats to his company's designated snooze spot, the so-called Van Winkle Room, where employees can sign up to catch a few zzzzzzs anytime. 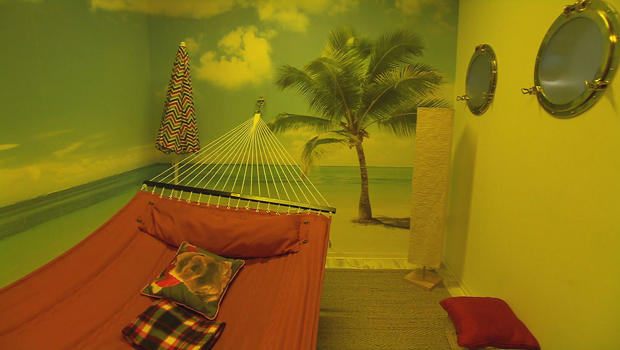 In fact, the room is so popular, he may even add a second Van Winkle.

The benefits of a nap

A nap's benefits rest largely in the method the nap is taken.  In order to get the most from a nap, it is important to understand what constitutes an effective nap.

According to the National Sleep Foundation, there are three types of naps.

Planned napping, also called preparatory napping, is a type of nap you take before you get tired.  A planned nap is great for people that know they’ll be up later than their normal bedtime, or if they tend to get tired later in the day.

Emergency napping is exactly what it sounds like – a nap that must happen.  It’s a priority.  This is for individuals that suddenly feel very tired and cannot continue their normal activities.  An emergency nap is great for those driving long distances that need to pull over and get a quick nap.

In spite of the type of nap you take, there are two important guidelines to follow for effective naps.

A short nap is most often recommended from sleep specialists.  Naps lasting for 20-30 minutes can improve daytime alertness and eliminate that groggy post-nap feeling.  Short naps also are less likely to interfere with nighttime sleep as well.

The napping environment can increase a nap’s effectiveness tremendously.  If possible, find a cool, dark, quiet, and peaceful place to rest, preferably somewhere you can lie down to sleep.  However, make sure you set an alarm in order to prevent from napping longer than anticipated.

Be careful not to take a nap longer than 30 minutes.  Longer naps can lead to sleep inertia, which is the disorientation and groggy feeling that happens from awaking from a deep sleep.  Also, avoid napping late in the day, which can negatively affect the length and quality of your nighttime sleep.

Some sleep specialists will caution against napping altogether.  Ralph Downey III, director of the Sleep Disorders Center at Loma Linda University Medical Center in California, stated, "Even just a little bit of a power nap reduces your nighttime sleep drive.  The nap becomes nothing more than another episode of fragmented sleep."

The best advice is to try napping and see how you feel.  However, if after following these recommendations you’re still feeling tired throughout the day, and constantly fighting sleep, you may have a more serious sleep disorder, such as obstructive sleep apnea.  If this is the case, no amount of napping will help you feel more rested.

If you live in Alaska and you would like to speak to a sleep specialist about benefits you can receive from napping, or if you believe you have a more serious sleep disorder, please click on the link below.