Nearly six months after the death of Carrie Fisher, the official coronary ruling was released.  The cause? Sleep apnea, along with other undetermined factors.

The Life (and Death) of Carrie Fisher

The daughter of singer Eddie Fisher and actress Debbie Reynolds in 1956, Carrie Fisher spent her life in the limelight of her fame.  The world-famous actress premiered in her first film Shampoo with Warren Beaty and Goldie Hawn, and was best known for her iconic role as Princess Leia in the original Star Wars trilogy.  But her true talents were shown through her skills as a writer.

Much of Fisher’s writings revolved around mental health advocacy, particularly her own bipolar disorder.  Her 1987 book Postcards from the Edge revolved around her struggles with drug addiction, and her one-woman script Wishful Drinking in 2008 was a narrative of facing the public shame and social stigma of addiction.  Besides her public challenges with her mental challenges, her life of drugs and alcohol led to the hardening of her arteries, one cause cited toward her death.

After traveling abroad in December of 2016, Fisher suffered from cardiac arrest.  After a few days in the hospital, Fisher did not wake from her sleep and was declared dead on the 27th at the Ronald Reagan UCLA Medical Center.  The Associated Press cited that fatty tissues built up around her arteries, drug use and sleep apnea are factors that contributed to her death.

What’s OSA Got to Do with It?

So with so many different factors contributing to her death, how was it that sleep apnea was the final straw?

Sleep apnea is a condition that causes interruptions in a sleeper’s breathing during the night.  The leading type of sleep apnea is obstructive sleep apnea (OSA).  OSA involves blockage of the upper respiratory airways caused by a collapse in throat muscles, the tongue falling back into the airway, or enlarged tonsils or adenoid obstruct airflow. 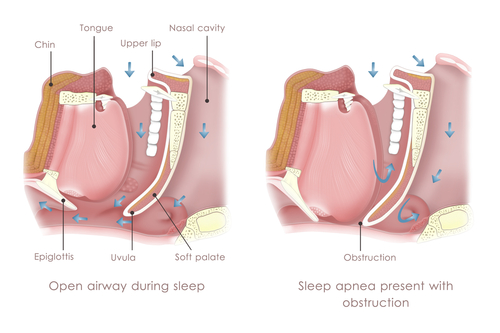 In our blog “Sleep Apnea and Heart Disease: The Risks of Untreated Sleep Apnea,” we discovered that the National Sleep Foundation had “found that men with severe OSA were 58% more likely to develop new congestive heart failure than men without sleep apnea.  They also found that men aged 40-70 with an apnea-hypopnea index (AHI) of 30 or higher were 68% more likely to develop coronary heart disease than those with lower AHIs.”

What Is High Blood Pressure, or Hypertension?

High blood pressure, also known as HBP or hypertension, is defined as a condition when the force of blood pushing against the walls of the vessel is consistently too high.  It is also a leading contributor to heart disease, strokes, and heart attacks.

The American Heart Association cites the cause of this is due to the “excess strain and resulting damage from high blood pressure causes the coronary arteries serving the heart to slowly become narrowed from a buildup of fat, cholesterol and other substances that together are called plaque.  This slow process is known as atherosclerosis.

‘As arteries harden with plaque, blood clots become more likely to form.  When an artery becomes blocked due to an accumulation of plaque or a blood clot, the flow of blood through the heart muscle is interrupted, starving the muscle of oxygen and nutrients.  The damage or death of part of the heart muscle that occurs as a result is called a heart attack.”

This plaque build-up is the same atherosclerotic heart disease that Fisher developed in her life span, contributing to her death in the end. earh

How often does this happen?

Unfortunately, Carrie Fisher is not the only victim of a sleep apnea-related death.  According to UW Health, a study conducted over 18 years found that those with untreated sleep apnea resulted in three times more deaths than those with non-sleep apnea.

The good news, however, is that the rate is not as high as other diseases, and can be prevented with the right care.  According to this same study, those who “had used continuous positive air pressure therapy (CPAP) for their sleep apnea fared better.” In other words, those who chose treatment for severe sleep apnea drastically reduced the chances of developing heart disease and thus reducing the odds of a sleep apnea-related death.

What can I do about it?

If you have been diagnosed with sleep apnea, be sure to keep track of your blood pressure readings in order to catch a rise early on.  You can buy a monitor at any drug store starting at $20, with Omron recommended by doctors as the most accurate on the higher price range.

Normal range is a systolic number (the top number that measures amount of pressure in arteries during contraction) under 120 and a diastolic number (bottom number that measures how much pressure is exerted against arteries while resting beating beats) below 80.  Pre-hypertension begins at 120-139 over 80-89, while stage one of hypertension begins at 140-159 over 90-99 and stage two at 160 or higher over 100 or higher.

If you are noticing a rise in blood pressure, be sure to visit your primary physician who can recommend additional treatment.  Whatever the recommendation, a well-rounded diet and daily exercise are sure to be one prescription, along with a change in habits if you drink and/or smoke.  The DASH (Diet Approach to Stop Hypertension) diet is designed to tackle hypertension specifically.  But with its balanced recommendation of fruits and veggies, whole wheat, lean meat, and low-fat dairy, it can still be easily adopted by non-hypertension users.

If you’re not sure whether you have sleep apnea, you can always take our quick quiz and find out.