As women enter menopause, a decrease in the production of certain hormones causes many physical and emotional changes.  Along with hot flashes and mood fluctuations, breathing issues, such as obstructive sleep apnea (OSA), can be more severe.  Learn about the connection between menopause, sleep and OSA—and what you can do about it. 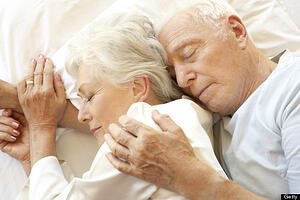 OSA is a condition in which breathing is temporarily paused and interrupted during sleep. It can present itself as snoring or gasping for breath and is generally triggered by the throat muscles relaxing too much during the night. This causes the airway to close, leading to a gasping sensation.  More than 18 million adults have sleep apnea, and while it is more common in men, the odds of experiencing OSA increase in women during and after menopause. There’s also an increased risk if you have family members with sleep apnea, if you’re overweight, or if you smoke or drink.

Why does menopause make it worse?

During menopause, levels of the hormones estrogen and progesterone decrease in women’s bodies. These hormones act as stimulants and play a role in keeping airways open by maintaining muscle tone in the throat. As they decrease, the chances of obstructed breathing rise.  What’s more, hormonal changes can lead to weight gain and a redistribution of body fat, sending more fat to the throat area, which can cause disrupted breathing.

How can it be treated?

Speak with your doctor about your symptoms. In some cases, a low dose of hormone therapy might be prescribed.  For mild cases of OSA, your physician may suggest lifestyle changes, like losing weight or cutting back on pre-bedtime alcoholic beverages. For moderate or severe cases of sleep apnea, using a continuous positive airway pressure (CPAP) machine when you sleep could be the answer. This device moves air pressure through a mask that you wear over your nose and helps keep your upper airways open which helps you stay asleep.

How Do Sleep Cycles Vary Between Men and Women?

A cup of coffee isn’t the only thing that can cause your energy levels to jump around. The other reason why you feel wide-awake at some points of the day and drowsy at others? Your circadian rhythm, an internal clock that helps regulate the cycle of when you feel sleepy and when you feel alert.  In a broad sense, circadian rhythms are similar from person to person, operating on roughly 24-hour cycles. But it turns out there are some notable differences in the sleep/wake patterns of women and men, which could explain why men tend to be night owls while women are more apt to be

Circadian rhythms are controlled by an area of the brain called the hypothalamus. Other influences include light (which sends a message to your brain that it’s time to wake up) and darkness (an indicator to your body that it’s time to release melatonin, a hormone that helps you fall asleep). Regular sleep patterns—waking up and going to bed at the same time daily—also keep your circadian rhythm functioning normally, helping to reduce the chance of sleep trouble such as insomnia.

What Sex Has to Do with It

Beyond these factors, there’s another important variable that influences your internal clock: sex. It turns out, male and female circadian rhythms don’t exactly match up. Men’s clocks tend to run truer to a full 24-hour cycle or longer (on average, men have a circadian cycle that’s six minutes longer than women ) meaning they may feel less tired in the evening. In women, the internal clock is more likely to be shorter than a full 24-hour cycle, making it more likely that they will awaken earlier, which may also increase their susceptibility to early-waking sleep disturbances like insomnia.

While eight hours per night on average is ideal for both genders, it turns out that men are harder hit by periods of deprivation.5 Lack of sleep causes work performance to suffer more for men than for women, and men recover less quickly from lack of sleep than women do.  On the other hand, women’s shorter cycles mean they are more likely to have a dip in energy at night, which could help explain why there’s an increased risk of work-related injuries in female shift workers.

Of course, it is possible to learn how to re-train your inner clock to help you feel more awake or sleepy at different parts of the day depending on your lifestyle needs. But left to its own devices, the body’s natural rhythms make it more likely that if you are a man, you will be a night owl, and for women, an early bird.

Alaska Sleep Clinic is the most comprehensive sleep lab company in Alaska.  Call us today for your free sleep assessment.